Gulfport artist Ray Domingo thought his plans for a 14-foot, music-playing, skateboarding gecko would be well received by the city.

He was half right.

The City of Gulfport pledged $16,000 from the city budget toward the construction of the sculpture, plus the installation of the base west of the Gulfport Casino Ballroom. Domingo must raise the funds for the remainder of the project. He estimates the total cost at around $36,000.

Some Gulfport residents disagree with the City’s part in the funding; they told The Gabber they feel the money could be better used elsewhere.

“This money needs to be spent dealing with parking issues, or fixing the sewers; it’s frivolous,” Gulfport resident Margo Rose told The Gabber. “The City has a tremendous amount of issues they need to address beyond another sculpture.”

“Gulfport needs more fixing on certain more important issues, not more art … no disrespect to the artist,” Fedele added to a Facebook conversation.

Domingo’s offering gecko posters (in exchange for a $100 donation); for $1,000, donors will have their names engraved on the completed sculpture’s plaque. According to the enthusiastic artist, he’s raised almost half of what half of the funds of his end of the bargain.

“I don’t understand the negativity toward something like this,” Domingo said. 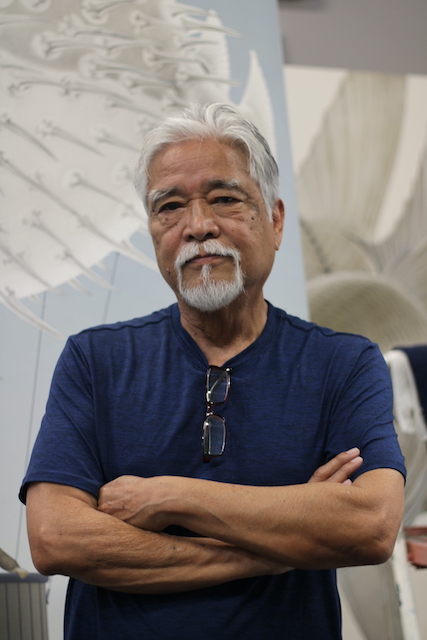 Some residents feel $16k from the city’s budget is unnecessary, while others love the idea of a giant gecko selfie opportunity.
Abby Baker

It’s not all negativity, though – some people love the idea, including resident Debbie Stevenson, who expressed her opinion on post The Gabber made on Facebook.

“I love it.. It’s so perfectly Gulfport. The City spent about the same amount, the $16,000, on the faded, torn, and missing flag/banners. My vote would be for the City to pay the total amount,” Stevenson said.

Justin Shea, Gulfport Cultural Events Supervisor for the City of Gulfport says the installation of the base has yet to begin. Once the sculpture is completed, it will be a City-owned piece of public art, despite Domingo’s local fundraising efforts.

Councilmember Michael Fridovich (Ward IV), told Gulfport City Council in April he thought the City should pay the entire cost. He reaffirmed his support in a phone interview April 29.

For now, Domingo is continuing to fund raise. He will spend several weeks in Tampa working with sculpting design company, Grand Theming Studios. It’s the painter’s first time working on a structure of this size, and he’s seeking council from Grand Theming, who has worked with Universal Studios and the Tampa Bay Buccaneers.