A picture of Maniya Sherriffe who said she was bruised and injured after being detained by a police officer at Boca Ciega High School earlier this month.
Bryce Graham, via Facebook

Updated Sept. 20: The Gabber has updated this article as new information about another Gulfport Police Officer at the incident has come to light.

The Gulfport Police Department has launched an internal investigation into an incident at Boca Ciega High School involving an officer and a 15-year-old girl.

Maniya Sherriffe, a BCHS student, says she sustained several injuries, including bruises to her face, after being detained by a Gulfport officer.

“We have received a complaint and we are investigating, but we are prohibited by law (FSS 112.532) from releasing any portion of the investigation until it is complete,” Gulfport Police Chief Robert Vincent told the The Gabber in an email.

This Facebook post from Gulfport Police Chief Rob Vincent explains why he opted not to suspend the officer accused of violence against a teenager.
Gulfport Community Crime Watch, via Facebook

Civil rights activists, Sherriffe, and her family held a press conference in front of Gulfport City Hall and police headquarters on Sept. 13.

Maniya Sherriffe is joined by Bryce Graham and her family calling for suspension of a Gulfport police officer during a press conference on Sept. 13.
screengrab from press conference

Sherriffe said during a press conference that Vandenberg pinned her against the wall and handcuffed her after an altercation with other girls who were bullying her. She said her face and shoulders were injured and bruised after the officer moved her to the school’s media center and library.

The teenager said she was upset by the treatment and her injuries, which came after an altercation with a group of girls.

“I was just scared. My face was hurting. I didn’t know what to do. I didn’t feel safe,” an emotional Sherriffe said. 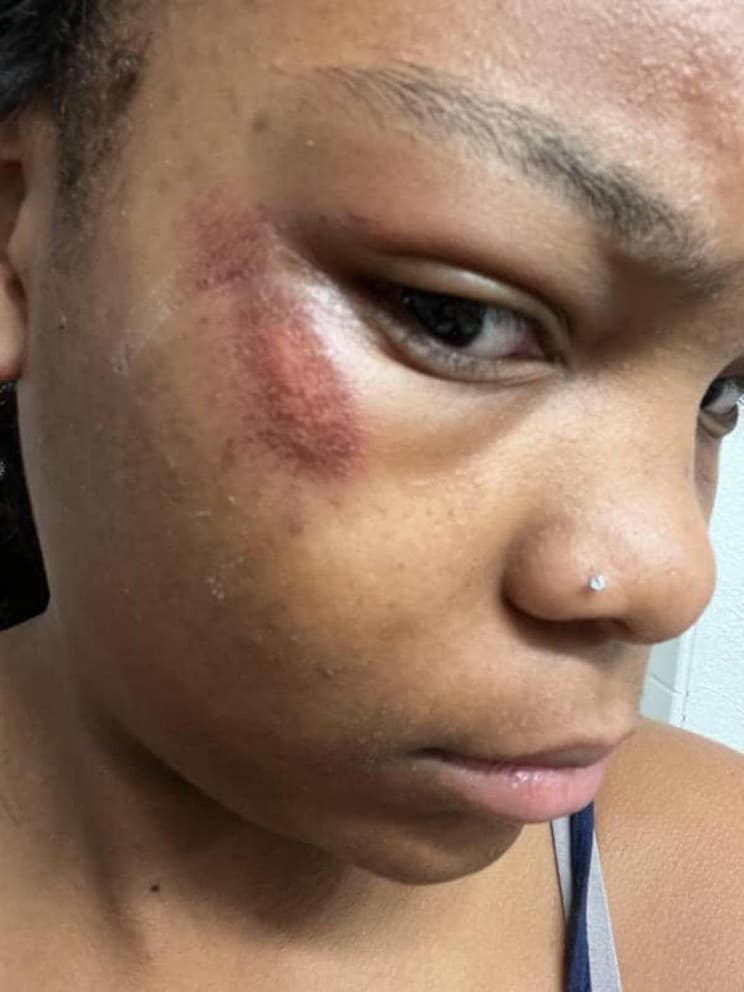 A picture of Maniya Sherriffe, who said she was bruised and injured after being detained by a police officer at Boca Ciega High School earlier this month.
Bryce Graham, via Facebook

Graham, who works with the Florida chapter of the Rev. Al Sharpton-led civil rights group, said the school had not adequately addressed bullying concerns involving six other girls who have been mistreating Sherriffe.

“We are calling on an independent investigation to be conducted. We are also calling for this officer’s immediate suspension,” said Graham, who said the family is in the process of a retaining an attorney to assist them going forward.

“We won’t let up until we get the answers that we need and this officer is held accountable. We won’t back down until justice has come down,” he said.

Vincent directed The Gabber to his social media comments about the department’s internal investigation.

“The law requires that such investigations be completed by the employing agency. We cannot request an outside agency to conduct the investigation unless there is a clear conflict of interest,” Vincent posted on a crime watch social media page.

Vandenberg was promoted to sergeant in 2008 after five years with GPD’s patrol division, according to the municipal agency. The department has not suspended him.

“Law enforcement accreditation standards require that officers be removed from an assignment only when their actions result in death or serious bodily injury. Because that has not occurred in this case, the officer will remain in his assignment,” Vincent also posted on social media.

Vincent would not say why Vandenberg, who is not a school resource officer, was at the school, or whether the two assigned SROs – Jimmy Embry and Jason Motte – were at the incident. A source close to law enforcement, who asked to remain anonymous, told The Gabber that Embry was also at the incident.

The student’s family wants more information, including whether there is surveillance video where the alleged incident occurred and the status of the officer’s body camera during the incident.

“We really need answers,” said Marvin Pickney, Sherriffe’s grandfather, who saw the injuries when he came to pick her up from school. “There’s no way she should to look the way she looks. Let’s be clear, we don’t want to paint a narrative that we are anti-police. We are anti-violence against kids.”

Sherriffe’s mother, Destini Lewis, said she first thought the injuries might have been inflicted by other students at school, but was upset when her daughter told her they happened during the interaction with the officer.

“It broke my heart,” she said.

The family declined further comment and a request for an additional interview from The Gabber. A spokeswoman for Pinellas County Schools also declined comment, citing the ongoing Gulfport investigation.

Lewis worried one of the wounds on her daughter’s face might cause a permanent scar. “It bothers me to see my daughter like this,” Lewis said.

She is also proud of her daughter for speaking up on the incident.

Through a spokeswoman,  the family declined further comment and a request for an additional interview from The Gabber on Sept.18.

“Due to the ongoing investigation by the Gulfport Police Department, the district cannot comment on the matter,” said Isabel Mascarenas, a spokeswoman for Pinellas County Schools.