A History of Gulfport’s GeckoFest

Gulfportians will celebrate the 22nd annual GeckoFest this Saturday. Since its beginnings in 2001, this end-of-summer event has allowed crowds to rally around this area’s favorite reptile, dress in costumes, sing, dance, and celebrate. “Game Night” is the theme this year. 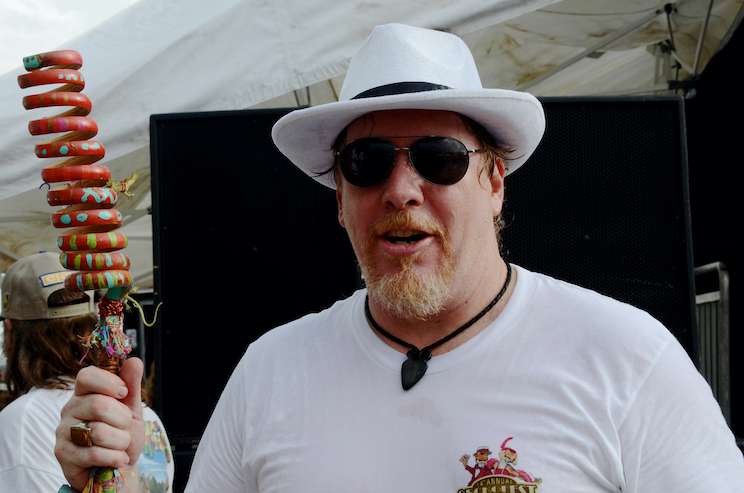 A Tranquil Town and Failed Fireworks

Although this popular festival now receives widespread attention, its beginnings in 2001 remind us of how much Gulfport has changed – including in weird and wonderful ways – since the beginning of the millennium. A journey back in time a generation ago reveals how a less-than-impressive fireworks performance led to a quirky and impressive cultural explosion.

Gulfport experienced a bit of a cultural identity crisis throughout much of the 1990s. As St. Petersburg’s leaders tried to shed that city’s multigenerational reputation as “God’s waiting room” with developers transforming their downtown and them banking on the promise of a newly-completed dome for a yet-to-arrive baseball team, Gulfport remained a quiet destination.

For example, residents repeatedly advocated for a community theater, starting in 1992. Multiple delays stalled the project. Finally, in December 2000, the Catherine A. Hickman Theater opened as a cultural beacon just north of the library.

The following summer, Gulfport’s Fourth of July fireworks celebration left much to be desired. Community leaders expressed their displeasure, and the company that supplied the less-than-exciting pyrotechnics promised to deliver another shipment for an event later that summer. 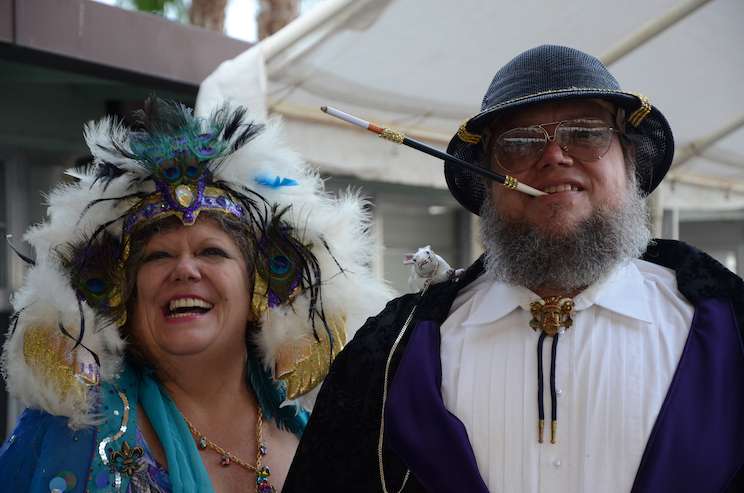 Dan and Juju Stevens were more than ready to flap the night away at the 2014 Gecko Ball. The theme that year? Roaring Geckos.
Cathy Salustri

Marlene Shaw, the city’s events manager at the time, was tasked with booking a band to accompany the fireworks at this first late-summer celebration. Hoping to add more flair, Shaw reached out to the community.

Local artist and longtime resident Elizabeth Neily had a different opinion. Reminding them that geckos are as native to Florida as out-of-state transplants, Neily suggested “Mullet Festival” instead. When votes were tallied that summer, the hanging chads unanimously favored the gecko over the mullet, and a new tradition began.

The first fall event in 2001 may have been a gecko-themed festival, but it also included a bit of a mullet mutiny, one staged with a smile by Neily and others. 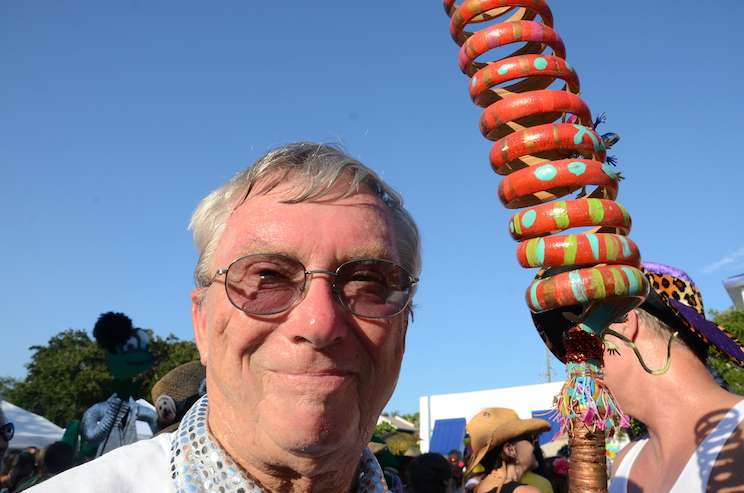 In what would be his final year as Gulfport Mayor, Mike Yakes is ready to lead the Gecko Parade in 2013. The theme that year? Gecko Night Fever.
Cathy Salustri

The City-sponsored event changed colors quicker than a lizard as the Gulfport Chamber of Commerce nurtured it and encouraged the area’s business community to take an increasingly active role. Without the chamber’s involvement, this event might have disappeared due to municipal budget cuts.

Annual GeckoFest themes amplified the community’s creativity as the event grew in popularity. The 2007 GeckoFest even stole a little cannon thunder from the Big Guava across Tampa Bay as a restored 1937 vessel in Boca Ciega Bay did its best Gasparilla-styled invasion imitation by shooting scorched hot dog buns into the air.

Fortunately, Boca Ciega already had a well-established reputation as a haven for pirates to protect the town, one that has lasted at least since the high school opened in 1953.

By this time, colorful costumes and balloons – along with noisemakers ranging from rattles to kazoos – had become the norm. From 130 vendors in 2007 to more than 170 two years later, the 2009 festival attracted approximately 15,000 attendees. 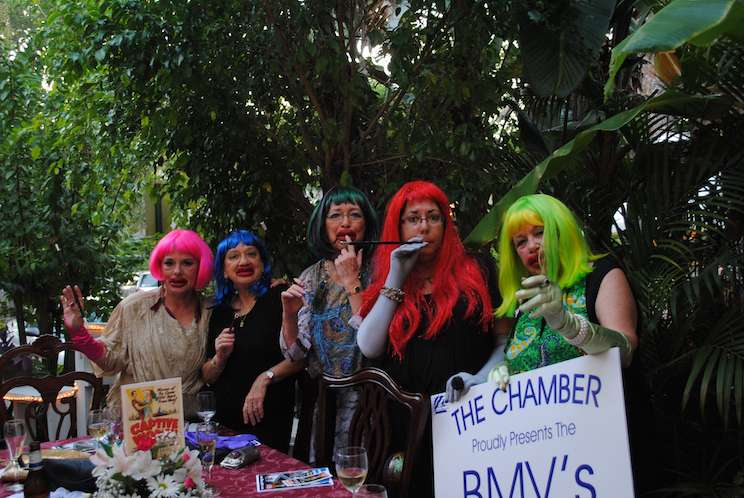 The 2012 Gecko Ball, held at the Historic Peninsula Inn, featured the theme “Hooray for GeckoWood” and these chamber volunteers got into the spirit.
Cathy Salustri

Adding a Ball Just Before Fall

The year 2009 marked the debut of the first Gecko Ball, held at the former Bellini’s, now the Sea Dog Cantina. The following year, the Gecko Ball moved across the street to the Historic Peninsula Inn and added its first themed celebration, “Geckos in Wonderland.” Funds from this 2010 event benefited Gulfport’s Centennial Celebration that October.

Gecko gatherings continued to flourish throughout the 2010s. The Gecko Ball and Gecko Pub Crawl were embraced by the community, along with GeckoFest. Face-painters, performers, and musicians brought excitement to the late August/early September event each year.

The Ball moved to the Casino in 2013. Whether it was during “Gecko Gras,” “20,000 Geckos Under the Sea,” or the groovy “Geckostock,” the annual crowning of the Gecko Queen became a highly anticipated event. 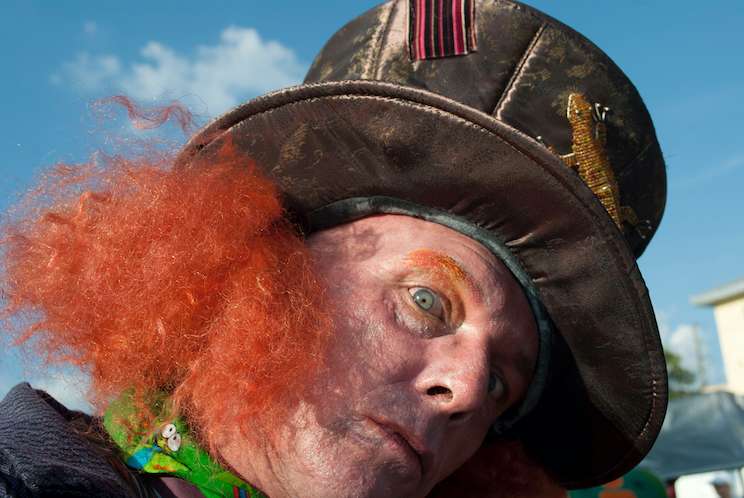 The 2012 Gecko Season theme was Geckos in Wonderland, and Jon Ziegler really got into the theme. Here he is at that year’s GeckoFest.
Cathy Salustri

An Unexpected Pause and New Excitement

Then COVID-19 hit. After the July 2020 decision to cancel Gecko-related gatherings, social media participants filled the void with their “Paint the Town With Geckos” initiatives to keep the lizard-loving legend alive.

Although the 20th anniversary celebration was canceled, the community and Gulfport Merchants Chamber of Commerce welcomed the resumption of Gecko Season in 2021. Ironically, a city-sponsored fireworks display helped to rekindle the event, one that filled the skies much better than the summertime dud that had allowed GeckoFest to begin two decades earlier.

Grab your masks, get in your costumes, and enjoy another historic GeckoFest on Saturday!

Articles published in earlier editions of the The Gabber contributed to this report.