Eight years ago, Rion Nakaya was living in Oakland with husband Michael Cosentino and their two children when her mother, Maggie, lost her partner of 37 years.

Like many Gen Xers, Rion, 47, faced a familiar challenge from 400 miles away: trying to monitor the welfare of a parent who is mobile and comfortable at home but on a fixed income and overwhelmed by the demands of a 90-year-old house.

When the maintenance on the 1926 Tudor in South Pasadena became too much for Maggie, who is now 69, the couple got serious about moving her to the Bay Area in 2016.

“We wanted to be closer to my mom and I initially thought she could move up here,” says Rion, a digital producer and founder and editor of the Kid Should See This, a free educational video resource for educators and families.

“My goal was to be near her and have the kids spend real time with her.”

Michael Cosentino and his wife, Rion Nakaya relax on the deck of their South Pasadena home.   (Jason Armond/Los Angeles Times)

A view of the courtyard that connects the main house to the ADU, designed by Medium Plenty.  (Jason Armond/Los Angeles Times)

The deck acts as a bridge between the main house and the ADU.   (Jason Armond/Los Angeles Times)

The ADU was required to look like a garage in the historic district because it is visible from the street.   (Jason Armond/Los Angeles Times)

A sliding Nanwall opens the kitchen and dining room to the outdoors.   (Jason Armond/Los Angeles Times)

The original fireplace and coved ceilings were preserved in the living room of the newly renovated home.   (Jason Armond/Los Angeles Times)

A view of the den just off of the living room as you enter the house.   (Jason Armond/Los Angeles Times)

The ADU faces away from the main house, with the entrance on the side.  (Jason Armond/Los Angeles Times)

The interior of the South Pasadena ADU features a loft.   (Mariko Reed)

For more than a year, the couple looked for an affordable rental for Maggie that was within walking distance of their Oakland rental. They also looked for a property in the East Bay that could house them all. But amid the rise in multigenerational living — a recent Pew Research Center study found 60 million Americans, or four times as many as in 1971, live in multigenerational housing — and skyrocketing real estate prices, the family decided that it made more sense to move to South Pasadena and renovate Rion’s childhood home.

“I was making more money and yet it was becoming harder to live,” Michael says of the challenges of buying a home in California. “We heard stories about people showing up with tech money and buying homes for cash.”

The garage-turned-ADU faces away from the main house, with a private entrance on the side.

For Nakaya and Cosentino, the question for the South Pasadena home wasn’t just about remodeling the kitchen and updating the HVAC but about how three generations could live comfortably together while respecting Maggie’s need for privacy and independence.

The answer came in transforming the detached garage into a 550-square-foot accessory dwelling unit, otherwise known as an ADU or granny flat, for Maggie.

The main house, which had degenerated over the years of deferred maintenance, would also need a full update, including work on a master bedroom addition that was in disrepair, the exterior stucco, the roof, water-damaged siding and worn interiors.

After seeing the work of Northern California-based Medium Plenty in Oakland, Cosentino, a senior producer at KPCC, and Nakaya reached out to the firm’s architects, Gretchen Krebs and Ian Read, for help renovating the property.

The architects, who are married, understood the couple’s appreciation for Midcentury Modern architecture and Scandinavian and Japanese design as well as their wish to create two distinctly different homes for three generations. 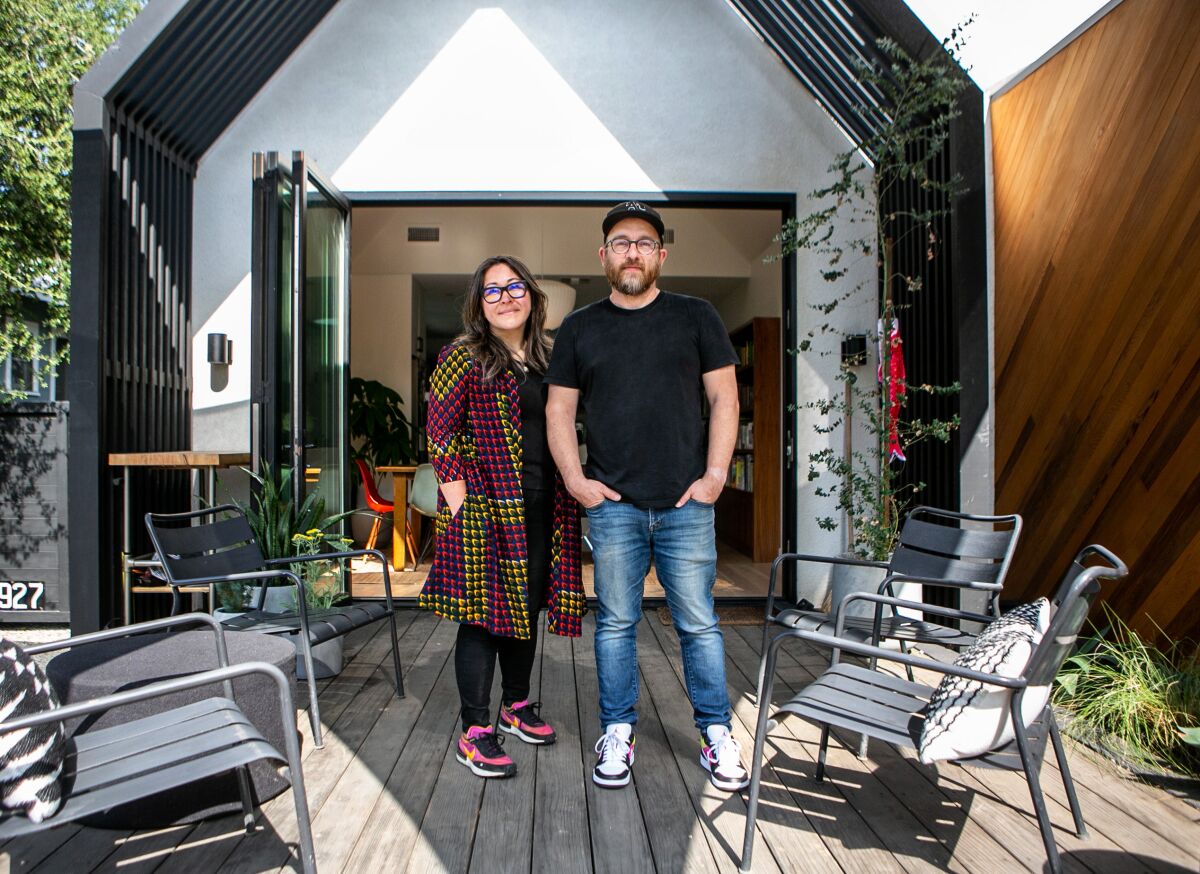 Rion Nakaya and Michael Cosentino moved from the Bay Area to be closer to Rion’s mom.

“We’ve been thinking about this a lot too,” Read says of aging-in-place concerns. “Our parents are in different states of health and economics. We understood the need to create enough space so that people have autonomy between them as well as an area where they can join communally.”

But the renovation wouldn’t be easy. Because the house is located in a historic district of South Pasadena, the architects, who worked with Downey-based GA Design Build, were required to preserve the qualities of the single-family home, such as the Tudor language of the street-facing façade, and design the ADU, which would be visible from the street, to look like a garage.

That didn’t stop them from pushing the envelope in back, where they designed a thoroughly modern exterior with dramatic pitched roofs graced with bold black windows, diagonal cedar siding on the master bedroom expansion and a slatted black trellis that extends the back portion of the kitchen and echoes the black trim on the windows.

“We were so constrained on the front, so the back was a place to go another direction while using some of the references of the house,” says Krebs. “It’s so fun to walk to the back and see a completely different house.” 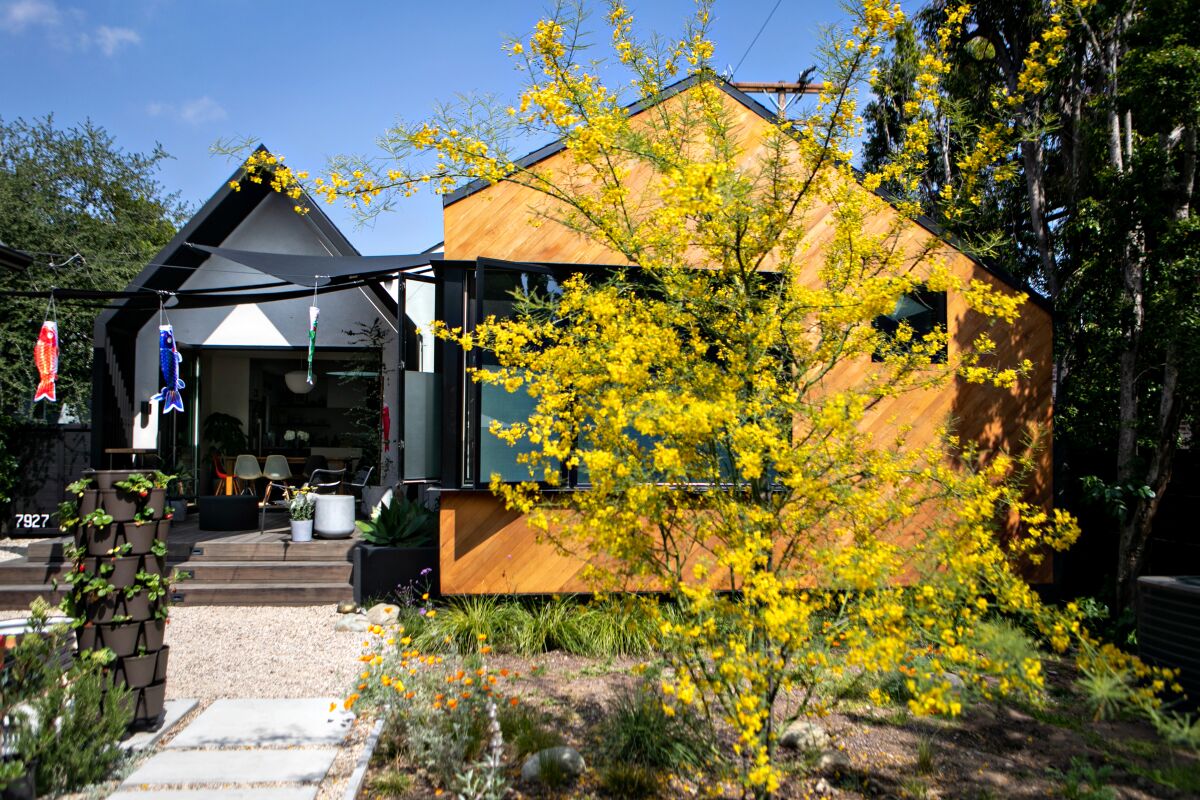 A view of the courtyard that connects the main house to the ADU, designed by Medium Plenty.

In its new manifestation, the main house is only slightly bigger: 1,636 square feet rather than 1,446. It also has an open floor plan, multiple skylights that bathe the interiors in light and warm wood cabinets for the family’s books and accessories.

While the living room was left intact, including the home’s original fireplace and coved ceilings, all of the interiors were gutted to create a more flexible floor plan with an easy flow for the couple’s children — Clementine, 11, and Dante, 14 — other family members and friends. The original fireplace and coved ceilings were preserved in the living room of the newly renovated home.

The wall that separated the kitchen from the backyard is now gone, creating an open, light-filled space that looks out over the yard and a new communal deck that serves as a bridge between the home and the ADU.

“We wanted to open it up,” says Rion. “The house was so dark and Medium Plenty added big windows, a Nanawall [glass wall] and skylights that bring the feeling of nature inside. We live in a tree-friendly city and there are so many birds and squirrels in the neighborhood. It makes a huge difference.” 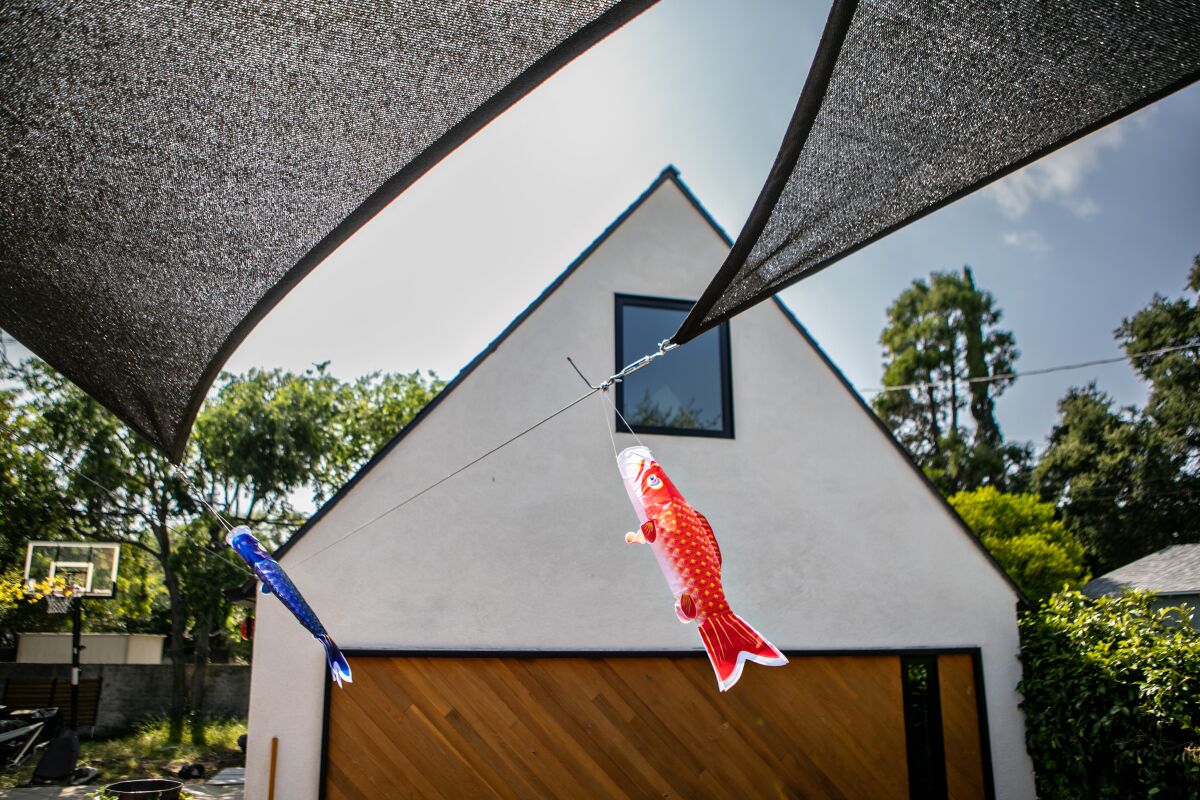 The entrance to the ADU faces away from the main house and street.

The small floor plan preserved the yard on the long and narrow lot, leaving room for a basketball hoop, an outdoor dining area and Rion’s drought-tolerant and edible gardening projects. The architects also maximized space by adding built-in storage in the garage and main house and an attic above most of the spaces.

Adding to the modern feel of the courtyard, the architects clad the exterior of the ADU in diagonal cedar planks, similar to the master bedroom addition. Closed off from the courtyard and street, Maggie’s dwelling faces away from the main house, with private entrances on the side and in back, where her door opens onto a fenced yard that provides ample room for her dogs.

“The existing layout of the building was well suited for an ADU because it’s all one level,” says Krebs. “The families can be adjacent to one another and then be able to come together.” 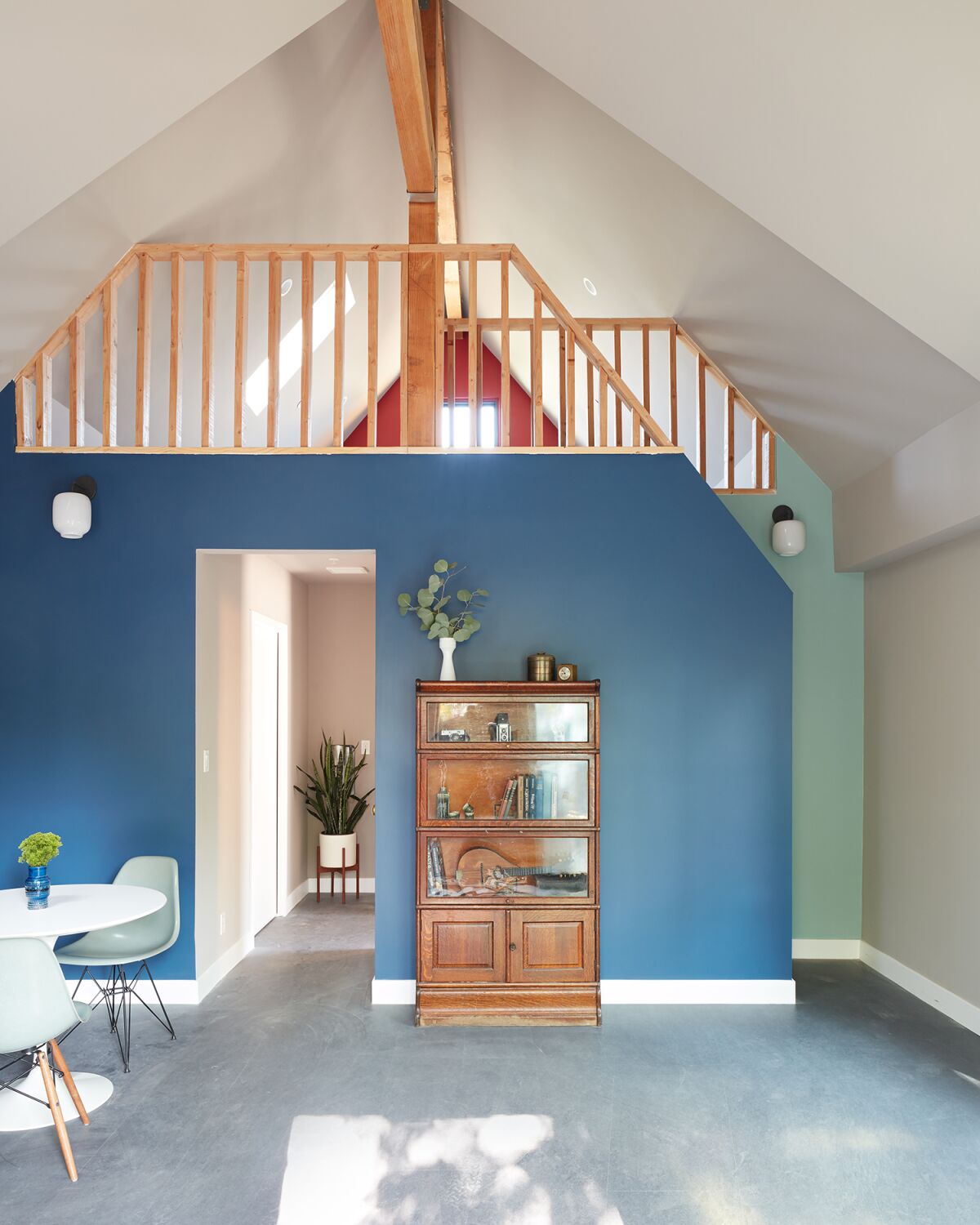 The interior of the South Pasadena ADU features a loft.

For Maggie, the ADU needed to be big enough for her to feel comfortable and cozy, but not so large that maintenance would be a problem. The architects installed no-nonsense linoleum floors, a small Ikea kitchen with Semihandmade fronts, skylights, a bathroom with a curbless shower for easy entry and a loft for storage.

“She didn’t want it to feel clinical,” says Read. “She wanted a colorful, clean box for her things and antiques.” 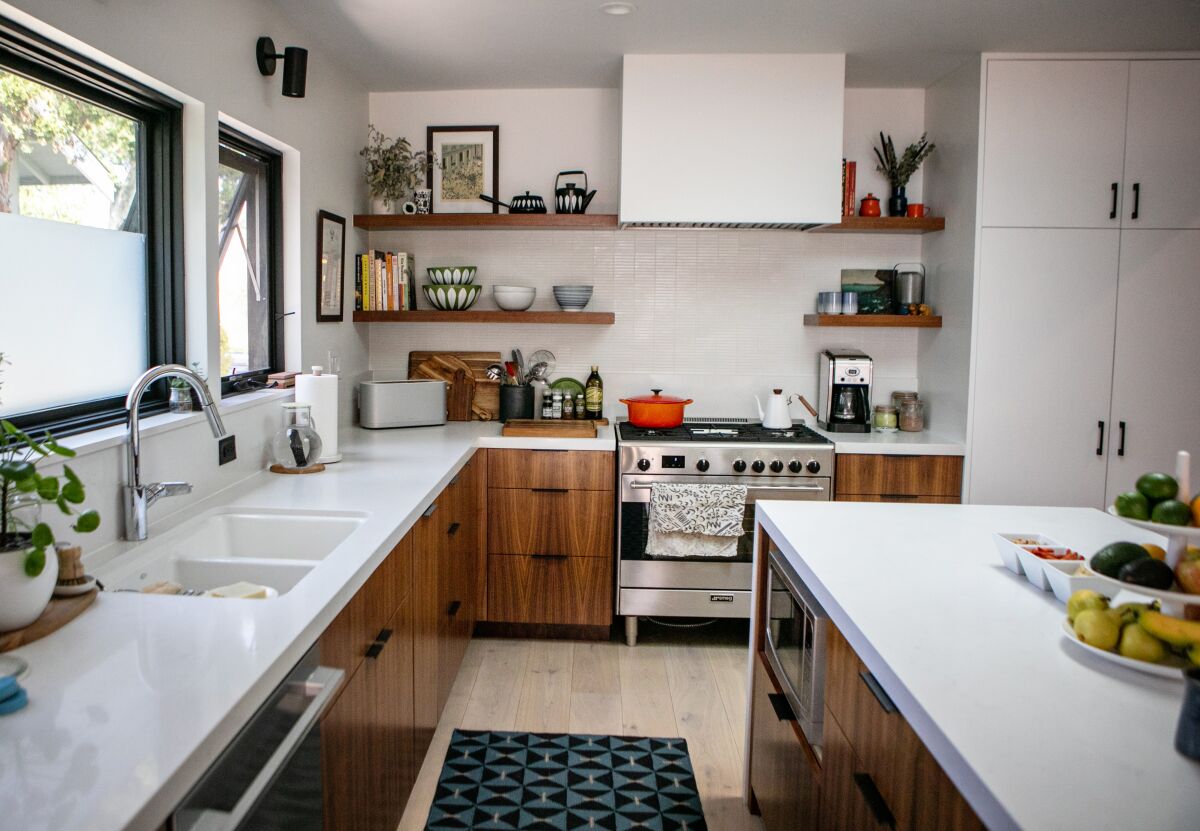 Asked if they had any advice for homeowners considering an ADU, the architects said it’s important to be clear on building guidelines before proceeding.

”An ADU seems like it’s a lot less than a house, but it’s still a house,” says Read. The South Pasadena ADU cost approximately $250,000 by the time it was completed in October 2021, but the architects say it would cost twice as much today due to supply chain and labor issues. “Be clear on what the guidelines are going to be. You can invest a lot of money in a project and find out you don’t qualify for permits, or you have to do upgrades, and it will cost a lot more than you think.” A photo in the dining room captures the couple’s children at the Cité des Sciences et de l’Industrie in Paris.

Twenty-two years after moving away, Rion is back home in Los Angeles County, which she says has changed immeasurably in her absence.

Prior to the pandemic, she had envisioned hosting friends in the family’s new open kitchen that was specifically designed with entertaining in mind. She also had hoped to support her uncle, her mother’s older brother, who was sick with cancer for many years before he died in 2020.

Still, much remains the same. Her middle-school principal lives down the street. Her children attend the same schools she did in her youth. 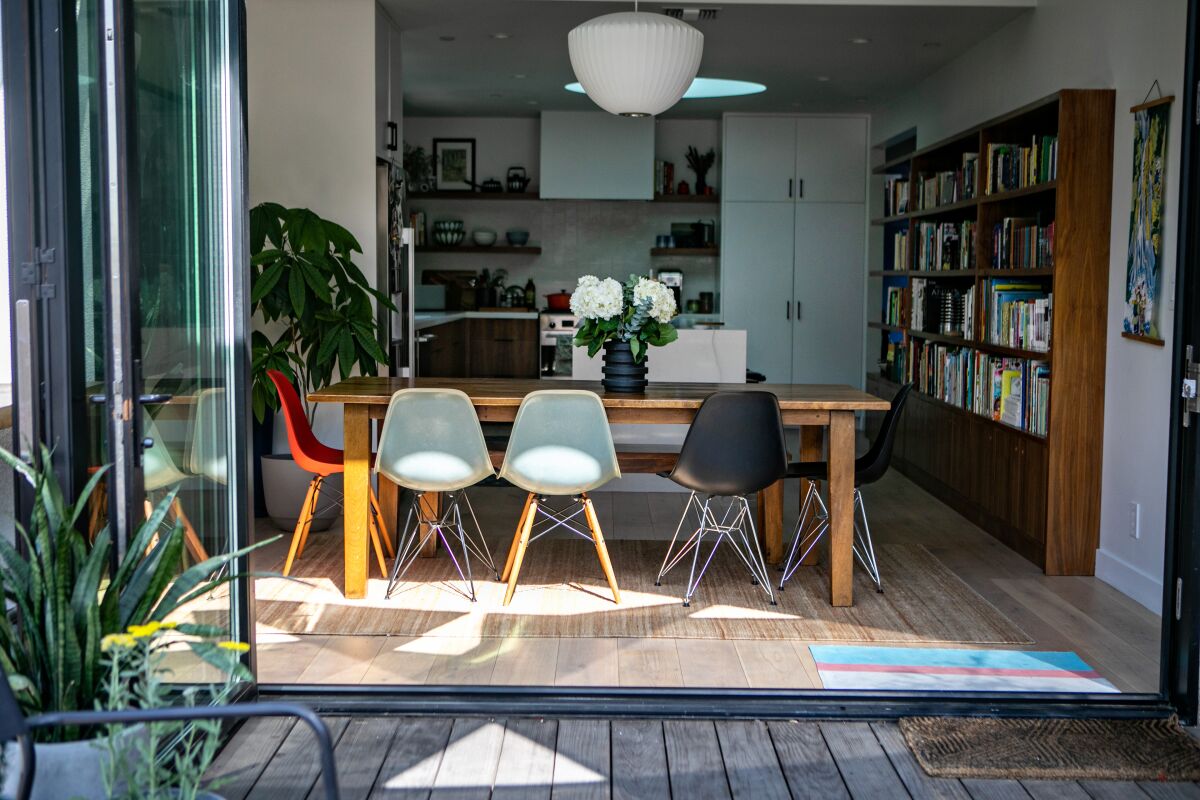 A sliding NanaWall opens the kitchen and dining room to the outdoors.

The property feels like a modern retreat on a street with a small-town feel, and the couple are happy with the home’s communal feel. “We have dinners together a few times a week with my mom,” Rion says. “Pizza nights on Mondays. We send the kids over with her mail and they help her wash the dogs.”

Adds Michael, who is also 47: “I’ve known [Maggie] for more than 20 years now, but I never really got to know her, because we didn’t live nearby. Now that we get to see each other so often, I have an opportunity to know her in a way that I hadn’t before.” 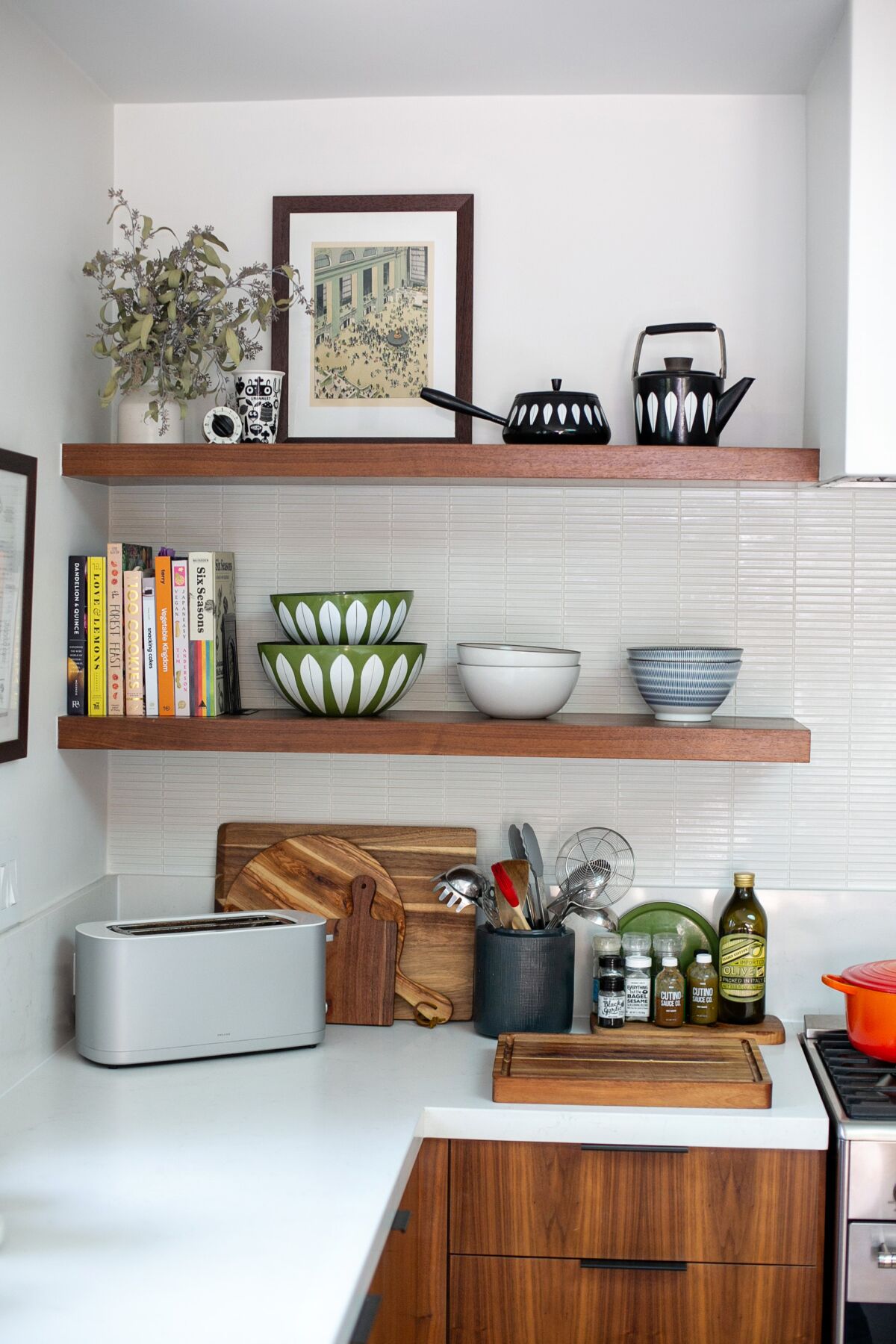 The couple are fans of Midcentury, Scandinavian and Japanese design.

Working in the tech industry, the couple led a nomadic life for many years, living in Brooklyn, London, Paris and the Bay Area. Now that they have put down roots in South Pasadena, they say their children have something they cherished growing up: a relationship with their grandmother.

“It is an absolute gift to spend time with my mother,” says Rion. “We consider ourselves extremely lucky.”