TREASURE ISLAND, Fla. – After Hurricane Ian it Southwest Florida, rescue groups from all over rushed to their aid, including members from the Treasure Island Fire Rescue team.

Brennan remembered preparing his team for the worst as Hurricane Ian approached Florida.

“I told them that Treasure Island will not look the same. It will be completely different,” Brennan said. “Our fire department probably will not be here.”

Hurricane Ian’s path later tracked further south – taking aim at Southwest Florida and mostly sparing Treasure Island. Brennan said he would have helped after any storm, but he felt particularly compelled to help Southwest Florida because of how close the storm came to hitting the Tampa Bay area.

“We knew that we dodged a bullet in Tampa Bay,” Brennan said. “We knew that going down there, our goal was to just perform and provide those people everything and anything they needed because we got lucky.”

Brennan, who was deployed for 11 days, was in charge of a team of 23 from the Tampa Bay region. He helped with welfare checks, responded to a backlog of 911 calls from the storm and brought food and water to animals and people who were stranded due to the flooding.

“You just hope and pray that when you get there that they’re ok and fortunately, every welfare check, every check that we made was a good outcome,” Brennan said. “What was amazing was these people lost everything, and they’re thanking us.”

Keller and DeBerry, who were deployed for one week, also went door to door doing welfare checks and helped with search and rescue. DeBerry said helping people is in his blood. His family has worked as subcontractors for FEMA and the United States Army Corps of Engineers for his entire life, tarping homes after storms.

“I volunteered to go down as quick as I heard,” DeBerry said about volunteering to help after Ian.

Chief Barrs also gave DeBerry the Medal of Valor – the highest honor in the department. He’s credited with saving an elderly woman’s life when he and his partner pulled her out of the floodwaters.

According to DeBerry, he and his partner – who he’d just met that day – were doing welfare checks when they accidentally checked a home that a crew ahead of them had already checked.

That’s when they noticed a woman in the backyard stuck in the mud.

DeBerry said the elderly woman, who has cancer, walked out back to get water to fill up her toilets, so she could flush them. He said the floodwaters were high in her backyard. 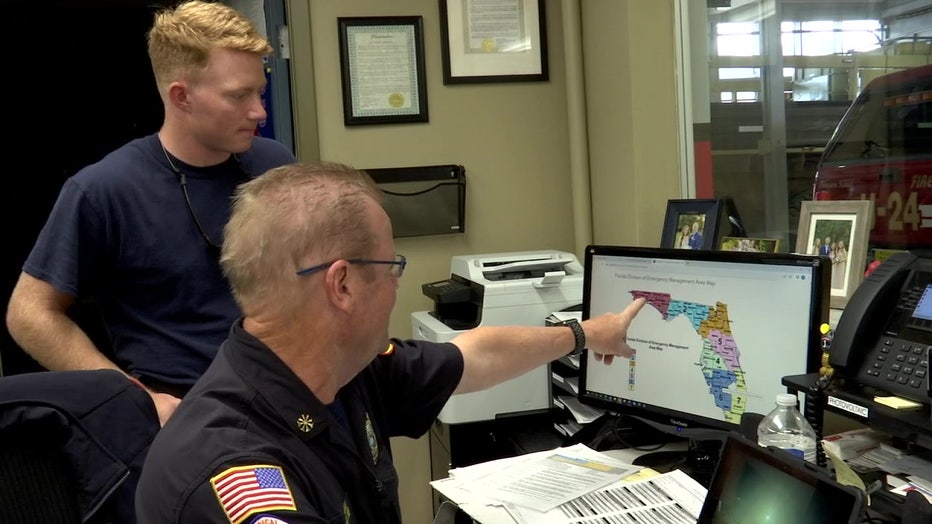 “I’ll always remember it as being able to save somebody then also make bonds with people that are incredible and also work in our state,” DeBerry said.