Vonda Catledge laughs as her animatronic pets, Ginger (dog) and Zizzy (cat), woof and purr along. Catledge received Ginger as part of a Florida Department of Elder Affairs program to help seniors combat loneliness during COVID-19 lockdowns. Catledge enjoyed her so much that she gave her kitty to a 100-year-old neighbor – before the neighbor ended up getting her own.
Amanda Hagood

They may look a little like toys, but they’re so much more.

Buddy, Irish, Brandy, and Ginger have thick brown fur, waggly tails, and a steady, reassuring heartbeat. When their humans get boisterous, they like throwing back their heads for a good “Arf!”

Zizzy and Miss Kitty have that ineffable feline grace, with delicate, pink toe beans and a soft meow. They enjoy stretching out onto their backs for a belly rub.

Their humans, all residents at The Fountains in South Pasadena, couldn’t be more delighted. As the group settles in for its regular happy hour, their animals, robotic Joy For All® Companion Pets produced by Hasbro, seem ready to join in the fun. Eyes blinking, heads turning, they offer the occasional polite woof or discreetly clean their paws as the humans swap stories and laughter.

Fountains residents received the pets as part of a Florida Department of Elder Affairs initiative to help seniors combat isolation during COVID-19 lockdowns. Over the last two years, Florida seniors have received about 11,500 pets.

Before COVID-19, therapy animals were commonly seen in Florida retirement communities, where they provided socialization for residents, helped Alzheimer’s patients recall memories, or eased the stress of doctor appointments. 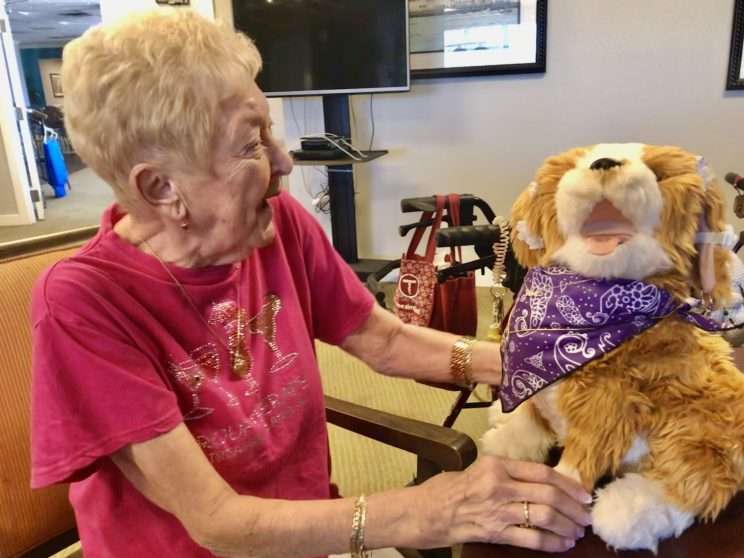 Sarah Nadler, a visiting assistant professor of animal studies at Eckerd College and a licensed mental health counselor who incorporates animals into her therapy work, says interactions with animals can boost neurotransmitters, promote movement and exercise, and provide mental stimulation and companionship.

A 2018 study conducted by the New York State Office for the Aging, which has its own animatronic pet program for seniors, found that 70% of pet adopters reported a reduction or a significant reduction in feelings of loneliness, as well as a decrease in physical pain.

And all this without the expense or trouble of a living pet. As Fountains resident Sue Quigley puts it: “No walking. No litter box!”

“And no vet bills!” chimes in her friend, Vonda Catledge.

“Animals can actually facilitate relationships between human beings,” she says.

This idea has borne out at the Fountains, where a cadre of individually isolated robo-pet caretakers quickly became a pack of their own. As COVID-19 restrictions relaxed, the humans and their pets began to meet daily, and even take the pets on outings. Now they’re a fixture in the dining hall and other social spaces.

“And a lot of people just thank us for bringing them along,” Quigley smiles. 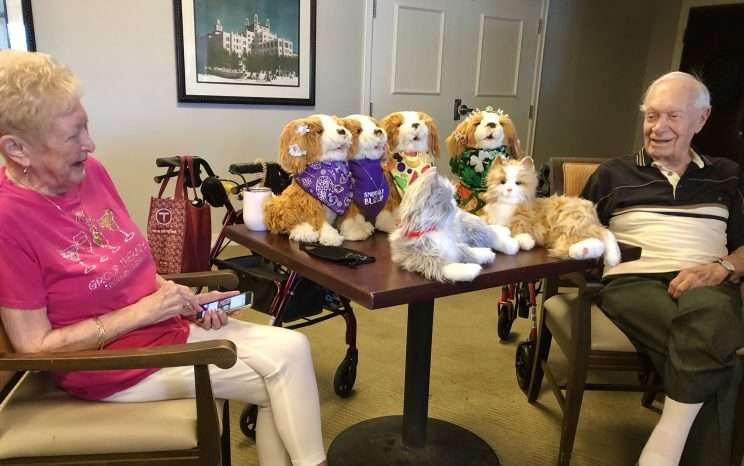 Robots though they may be, the cats and dogs seem to enjoy the daily gathering with their humans. Sue Quigley (left) and Jack Rickert (right) sit with Brandy, Buddy, Ginger, and Irish (canines) and Miss Kitty and Zizzy (felines).
Amanda Hagood

But, cute as they are, can animatronic look-alikes really fill the place of living therapy animals? In some cases, Nadler says, they can.

“There is space for both,” she says. “Both have value.” Robotic pets can still provide crucial cognitive enrichment and a connection to others. And in some cases – especially in working with young children who may not understand how to respectfully handle animals – they may be a more ethical alternative. Nadler cites a case at a Japanese retirement home in which residents were given crickets to care for. While hardly the cuddliest or most charismatic of pets, the crickets still provided their humans ample opportunities for nurturing, problem solving, and comparing notes with other residents.

The animatronic pets at the Fountains have certainly taken on a life of their own: Much of the discussion at today’s soirée revolves around the upcoming nuptials of Buddy (companion of Jack Rickert) and Brandy (Sue Quigley). Bride and groom will wag down the aisle – she in a lace bandana and veil, he in his finest canine tux, accompanied by “meower” girls Zizzy and Miss Kitty  – as soon their best dog returns from vacation.

“Unless someone gets cold paws!” quips Quigley.

According to the Fountains’ Community Life Director, Delena Waters, these pre-programmed pets have made quite an impact on her clients.

“They’ve enriched interactions among our residents as a gentle sort of bonding force,” Waters says. “I think there’s a little magic in all of us, and these pets have been just the thing to bring some of that magic out into the world.”

From where I sit, she seems purrfectly correct.