Don Nolan began hosting Treasure Island Beach Cleanups in 1999. At the end of this year, he’ll hang up his hat and picker.
Abby Baker

Since 1999, Don Nolan has spent every second Saturday of the month meeting cleanup crews in the parking lot of the Treasure Island Waffle House, then heading across the street to pick up trash on the beach.

It’s not a glamorous job, and it’s a self-appointed one he’s dedicated 24 years of Saturdays to without much complaint. In December, Nolan will give up his position as the head of cleanup due to a “lack of volunteers” and a need to slow down.

His presence on the beaches will be missed.

“We look forward to the passing of the buckets and pick-up sticks,” Auerbach said. “Personally, I am proud to continue his legacy of a clean beach and hope to bring more awareness to our residents and visitors about the importance of a clean and clear beach. “

Nolan said he began spearheading the Treasure Island beach cleanups after the former group leader, Don Graham, asked him to take over in 1999. For most of the two decades, Graham supported his cleaning habit by selling the aluminum cans he bought, sometimes earning $100 a month.

“You feel like you’re doing something, a little something for the environment,” Nolan said. “The city appreciated it, the locals appreciate it. I even had a fellow visiting from Germany jump in once. He said he liked what we were doing.”

When the city put out can recycling bins, it cut his profits. 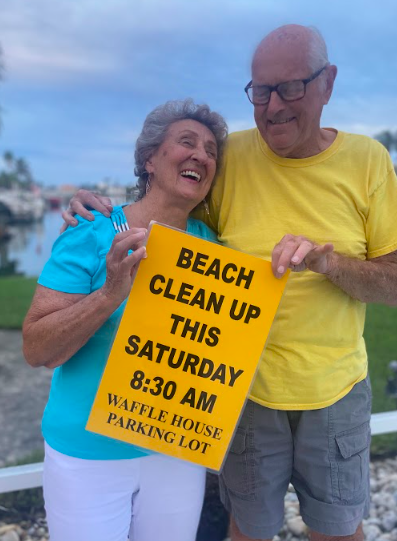 “It was fun while it lasted,” Betty Nolan said. “You should have seen the Christmas parties we’d have with the volunteers.”
Abby Baker

Though endings can be bittersweet, the Nolans know change is unavoidable. They hope further Keep Pinellas Beautiful efforts will pick up, and that the beach will continue to get much-needed attention.

What will Nolan do with his free Saturdays following his retirement from beach cleanups?

“Oh, I guess now I’ll be cleaning the garage instead,” Nolan said with a laugh.