TREASURE ISLAND, Fla. – Chief Trip Barrs is the top dog over at the Treasure Island Fire Department, but now he’s got a new ‘Captain’ sniffing around the place.

“It is a 24-hour a day shift, he’s constantly got somebody petting feeding him walking him, he’s going to have a good life,” said Chief Barrs.

It’s a much better life than Captain has ever known. He was among the 4000 beagles rescued from a facility in Virginia that was breeding dogs for research.

Captain is the newest member of the Treasure Island Fire Department.

When the department learned that some of those pups made it to the Humane Society of Tampa Bay, it couldn’t resist adding him to the team.

“It is a win-win for us. We get to give him a forever home with lots of love and he will support our firefighters when they see trauma,” the Chief explained.

Thousands of beagles have a chance at a new life across the country, including in Tampa Bay.

Captain is eight months old and is still learning the ropes around the department. Eventually, the fire department plans to use him as part of their life-saving education trips out in the community.

“We definitely have big plans for him in the future, he’s going to be busy that’s for sure,” said Lt. Steven Rowland, a paramedic with the city of Treasure Island. 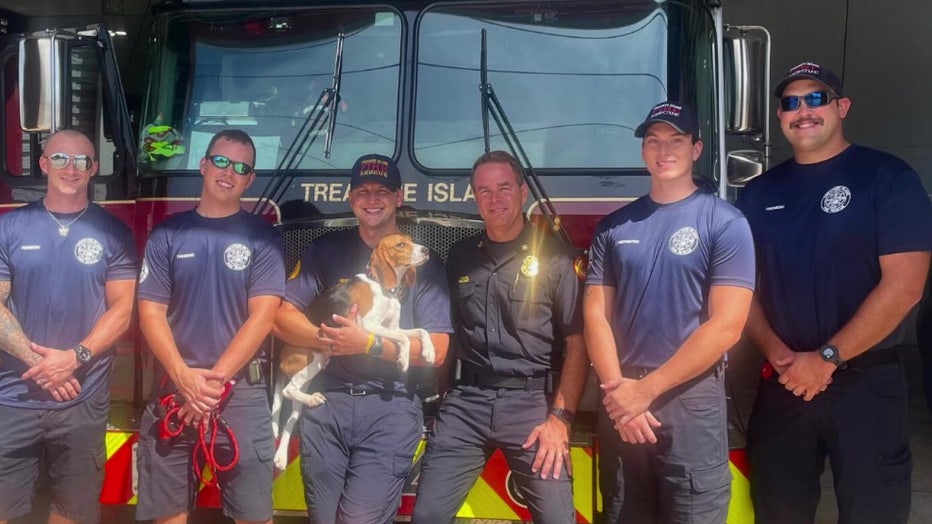 The Treasure Island Fire Department’s newest member is a four-legged beagle named Captain who was one of approximately 4,000 rescued from a Virginia breeding facility.

Captain already has an official ID badge and is quickly making friends with just about everyone he meets. It’s not the typical rescue these firefighters handle, but this one may be the doggone cutest.

“He’s always happy to see us no matter what. It is pretty special. I don’t know if he knows yet how much we appreciate having him around,” Lt. Rowland said.